Chris grew up in the small town of Silver City, New Mexico between alpine forests and the southwest desert where his artistic eye thrived in the magical light of the environment. His work is well known in the region for its romantic depiction of “ordinary” scenery. Inspired by his cousin, he began drawing at an early age. Instead of following his artistic passions, Chris took the path most traveled- and recommended by well-intentioned non-artist types- to pursue work that would keep art making his “side-gig” for nearly two decades. He experimented with and found some success in bartending. In an effort to “get his act together” he joined the US Army where he worked as an ophthalmic assistant. Following his time in the Army, he worked with at-risk youth in various settings. His teaching skills developed and his knowledge of Life grew, but art never stopped calling him. In 1998, Chris enrolled at University of Colorado, Colorado Springs (UCCS) where he earned a BA in Fine Art and graduated in 2001 with distinction. He began his teaching career in 2002.

Now a well-known figure drawing and painting teacher in the Pikes Peak region, Chris taught drawing at UCCS. After teaching a decade at the Cottonwood Center for the Arts, Chris opened the Alvarez Art School in 2010, where he teaches drawing and painting to adults and children. He has developed a holistic art program, which includes instruction in seeing, drawing, and painting techniques, exploration into the philosophies of being an artist and art making. 2018 brought some new and exciting changes to the Alvarez Gallery and Art School, which now includes a gallery and is located in downtown Colorado Springs.

Chris enjoys the outdoors, mountain biking, birding, juggling, dad jokes, and collecting vinyl records. If you visit the Alvarez Gallery and Art School in downtown Colorado Springs, be prepared to hang out and listen to his collection of records. Married, Chis is the father of two elfin children who remind him to pay attention, be present, and notice the beauty in everyday moments. 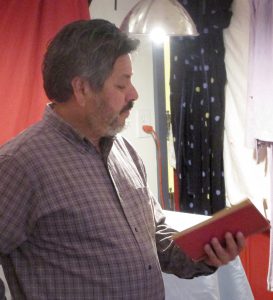 “The technique of painting is very difficult, very interesting.

There is no end to the study of technique.

In fact, technique can only be used properly by those have definitive purpose in what they do, and it is only they who INVENT technique. Otherwise it is the work of parrots.”